We all remember the time when staff in cafes and restaurants used to dress in all black, in uniforms that we’re more likely to blend into the crowd and were not really all that distinctive at all. However nowadays they’re more likely to be kitted out in denim aprons with leather trim, a trend Felicity Rodger’s multi million dollar business Cargo Crew is largely responsible for.

The family business ‘Cargo Crew’ disrupted the uniform market by approaching the retail wholesale model in a new way. A true Australian success story, on track to turn over $10 million this year with exports in over 30 countries. It’s taken out the Small Business category in the Telstra National Business awards and even Gwyneth Paltrow has adopted Cargo Crew aprons as the uniform for her business Goop.

Cargo Crew started off on a very small scale in 2002 when Rodgers used a $2000 tax return and a loan of $1500 from her Dad to start a uniform business. The former fashion designer has bootstrapped the business all the way. “When I got paid I put the profits in the bank to pay for the next job,” she says.

Rodgers teamed up with her sister Narelle Craig and built a successful business creating tailored customer uniforms for corporates, snagging L’Oreal as a major client. But Rodgers had to reposition the business when work started to dry up.

“For many years we were focused on that corporate market and we saw a change from dealing with marketing to all of a sudden dealing with global procurement and things became about sourcing globally and relationships. The work that you were doing wasn’t the first consideration anymore, it was more about how cheap can you get a product.”

Rodgers and Craig decided to broaden their offering and bring it to a wider market, launching Cargo Crew in 2012. Rodgers’ husband, Paul, came on board three years ago.

“Prior to that we don’t feel that there was a brand in the uniform market, it was very generic, If you went to a uniform shop or store you’d see all the same ranges, there wasn’t much choice.”

Cargo Crew products were available to buy immediately from existing stock, rather than customers having to place minimum orders. “That’s how we disrupted the industry because we moved away from that wholesale model and went direct wholesale to the customer. The timing of the decision to move into that space was the perfect storm of our offering being right for the time. Everyone in hospitality was very focused on not only achieving the food and the atmosphere but completing that whole picture of the theatre that they provided to their customer and their experience, and uniforms play a big part in that.”

“We started with four denim aprons, we knew that wasn’t enough to launch an online store so what we did was we curated and sold other suppliers’ product online as well. Eventually it got to a point where we could stock all our own products.”

Based in Brunswick, Cargo Crew’s staff of 23 now create all kinds of contemporary uniforms and corresponding accessories with a particular emphasis on the hospitality industry. Cargo Crew’s range is designed in Australia and manufactured in China.

Launching online meant Cargo Crew automatically became a national and then international business. “Ten per cent of our online revenue is international now, with the US being our biggest market to date. We ship to 30 countries and that’s without us physically going over there,”.

“What I love about today is you don’t need to know someone. The opportunity that businesses have with exposure online is if you are doing something really good and you have a point of difference people are going to notice that from all parts of the world. Even nationally a lot of the corporates we have picked up, like Freedom Furniture and Hoyts, they have found us online. It’s like having sales people on the road.”

The downside of online retail for Cargo Crew is the proliferation of imitators.

Cargo Crew has had its products, photographs and even props replicated.

“It’s really hard to deal with when you put so much time and effort into developing something unique. Unfortunately it’s the way of the world, it happens in all industries. We do take a strong stand and we will institute legal proceedings to enforce the rights that we can.”

Rodgers says she chooses to focus on the future and on continuing to innovate.

“People like that are just lazy and riding on our coat tails, people know it. People who really appreciate your product and know what you are doing, they know when there is an imitation and a rip off of a product. Customers are savvy these days.”

Jana Matthews, director of the Centre for Business Growth at UniSA Business School, has watched Cargo Crew closely since Rodgers completed the growth program at the business school.

She believes Cargo Crew’s success can be attributed to its great products and customer service, smart marketing and good financial management and inventory control systems. “Customers want what they are selling,”.

Matthews says the next step for Cargo Crew would be to bring on an experienced chief executive.

“Felicity, her sister and husband have done a great job guiding and managing the growth of the company until now. But in order to scale rapidly, they will need to have someone who has had experience with rapid scale-up, who matches their values, and will focus on firstly building a great organisation that can sustain rapid growth, secondly continuing to market, and thirdly financing their growth.”

A very inspiriting story indeed, but it does give you a lot to think about and touched on some somewhat controversial issues such as online imitators and suggestions to bring in outside help though this family has already been able to do so much on their own. Would love to know your thoughts on this! Anatole 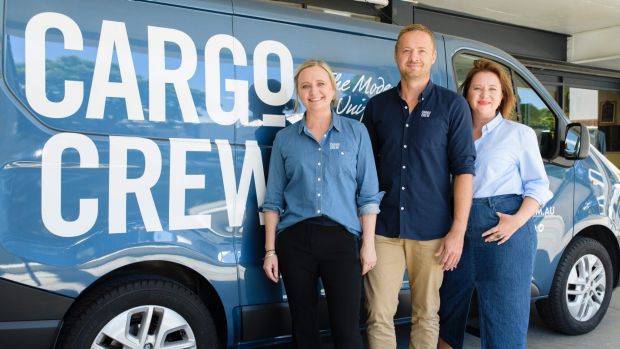